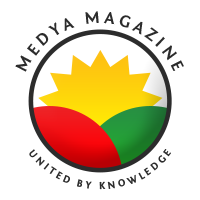 The name Medya comes from Medes, a nation who founded the age old Median Empire, which existed from 678 BC to 549 BC and stretched from Mesopotamia to Central Asia. Diyako became the first king of the empire, after he united all the median tribes under one kingdom. Kurds today see themselves as the descendants of these median tribes.

The Medya magazine, originally a Danish edition, was established on 10th of December 2012, this coincides with the UN’s Human Rights Day. The Human Rights treaty was first proclaimed on December the 10th in 1948 by the UN General Assembly, an important date in regards to the Kurdish liberation struggle and the oppression of the Kurdish nation.

Medya Magazine is a magazine and blog that aims to bring the latest trends in society, while critically analyzing and examining these trends. Moreover the magazine aims to highlight individual personalities that are positive role models and are able to make a positive impact by leaving their mark on our society.
The magazine is independent and not linked to any political, religious or commercial organisation.

The blog section reflects the authors view only; Medya Magazine can therefore not be hold responsible for these views. However the magazine will ensure privacy and that all content is consistent with democratic values.