My Daye (mother in Kurdish), Tahmineh, is the kindest and most humble person you will ever meet. In her early 20s my mother obtained a teaching degree and was an economically independent woman. Soon after her marriage to my father, he decided to become a Peshmerga to fight for Kurdish rights in Iran. My parents were forced to live in a long-distance relationship for eight years and my mother had to raise four children on her own. What astonishes me is that she never complained nor blamed my father for leaving. She knew that one day her family would be reunited and that all the sacrifice was for a better future. She gave us all the love and security she could possibly provide. Her love was pure and endless, her calmness and balanced being was the only safety I had as a little girl growing up during the Iran-Iraq civil war. My mother taught me about adaptation, persistence and fighting for what I believe in. She helped me become who I am today.

Tahmineh gave birth to me and my aunt Sakine was there the moment I was born, cutting off the umbilical cord and creating a special bond between us. Educated as a midwife and being a highly independent young woman, my aunt also decided to join a Kurdish resistance movement in Iran. There she attended to the wounded and brought new life to the world. Today she continues her political activism living in exile.

My Nana (grandmother in Kurdish), Khanzad was a beauty with blue eyes and thick curly strawberry blond hair. My grandmother was in an accident when she was a teenager, falling off a horse. As girls her age were not allowed to ride horses, she kept the fall a secret and didn’t seek medical help. As a consequence her injured hip never healed well, causing her lifelong suffering. My grandfather was from a noble family and fell in love with a farm girl, but no class differences could stop him from marrying her. Through her story I learned about the culturally implemented differences between men and women. My grandmother was always surrounded by grandchildren and her animals. I remember one of the children’s stories she used to tell me, a story about a stork and a fox sharing a cake, every time they counted the pieces of cake, they had less left. She would say never count more than once and always trust your initial counting. I haven’t seen my grandmother since I was nine. I long to see her, sit next to her, hold her hands and tell her that I love her.

I was fortunate to end up in one of the most democratic and progressive countries in the world. Sweden gave me the chance to live, get an education and fostered my individual freedom. No matter how far away from our homeland, the struggle for Kurdish independence continues. Today, thousands of Kurdish mothers, sisters and daughters are taking up arms alongside men. They are fighting for their dignity and freedom. Fighting to stay alive and not be deprived of their rights in an already male-dominated society. These women could be my mother, aunt and grandmother. Or me… 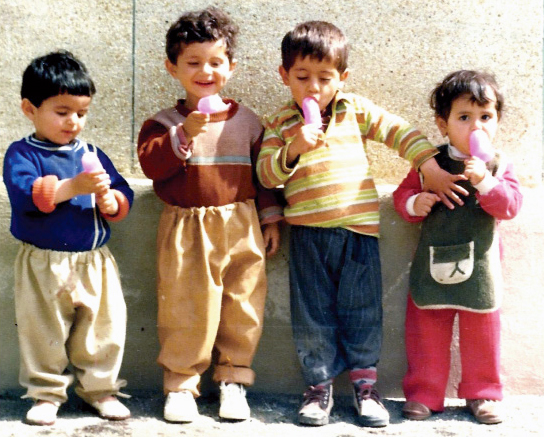 My cousins and I are eating homemade ice-cream.
This photo was taken during the civil war between Iran-Iraq in Mahabad (eastern Kurdistan/Iran).