This morning I woke up to find that overnight a thick blanket of snow had fallen across Slemani and its province. Without much thinking, I packed my camera bag and decided to explore my first ever encounter with snow in Kurdistan. It is safe to say, the snowman has made an early appearance in 2015 with countless sights of carrot nosed snowball heads being rolled by kids and adults. Although Kurdistan hasn’t been in celebratory mode for a while now given its current circumstances, it would have been impossible to enjoy the weathers beautiful view without sharing a thought for the 2 million refugees and IDP’s currently being housed by the KRG in its borders. The bittersweet emotion from today led me to remember a poem by one of Kurdistan’s greatest writers of all time – Tawfiq Mahmoud Hamza (1867–1950), better known as Pîremêrd titled “Slemani in the Snow” (translated). 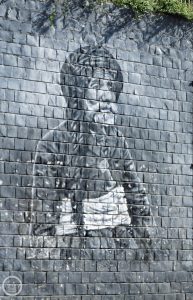 Slemani in the Snow

In the morning I awoke to snow everywhere,

Slemani city was the bride with silver veils in her hair.

We had waited so long for the snow in the night,

I’ll snowball it all, even though my hairs gone white.

I remember the snow lions we rode with no reigns,

In shadows that froze until a ripe summer came.

How superb that white dress and Goizha’s heights!

Lovelier than the sky with its blue on this white.

The cloth of angels in the sky is as white as this snow,

Our angel was loveliest, but we are betrayed now.

With each snowflake of gods shade that falls,

These are angels amongst us until the chaos calls.

The white cheeks of our city glistens with jewels

Angels of Qaff Mountain couldn’t have such attire.

As the ice dances through trees and leaves.