“Dr. Rebeen claims doctors do not have enough resources and that the healthcare system needs proper infrastructure. There are defects in the training of doctors and pharmacists. However, He is optimistic about the will and determination of doctors, staffs, and people. He also believes that a Kurdish doctor can be as good as any doctor from anywhere.”

Aras Ahmed: How do you view and evaluate the current healthcare system in Kurdistan region?

Dr. Rebeen Rahim: The current healthcare system is in a quiescent position, it does not advance.  If the progress remains slow, as currently, there is little hope for a bright future. We need more resources, better administration, larger number of doctors and staffs, an efficient nursing care, and more facilities and specialties, which are lacking in the region.

Aras Ahmed: How would you differentiate between an idealized European doctor and an idealized Kurdish doctor in terms of knowledge, passion for their work, commitment, and loyalty? What makes a good doctor?

Dr. Rebeen Rahim: I think this question presumes that origin has an impact on passion, dedication and talent.  Given the right tools and opportunity, a Kurdish doctor can be as good as any doctor from anywhere.

The idealized European doctor and a Kurdish doctor are not different in term of scientific knowledge, the evidence is that you can see lots of successful Kurdish doctors who practices medicine abroad successfully and there are lots of efficient and skillful doctors inside Kurdistan, but the problem is in the disorganized system we have.

In Europe one of the main aspects of continuous medical education is focusing on communication skill, medical ethics and research, which is a bit weak in our hospitals. Secondly, Kurdish doctors are seeing and treating huge number of patients on daily basis as compared to Europe considering all these patients. It will be very difficult to apply the appropriate communication skill.

Most of times we give priorities and spend time more with those patients who are critical. Moreover, as there is not a concrete primary healthcare system, so even patients with mild illness like “simple flu” visit the Emergency Room, seeking treatments which makes doctors’ duties crowded and difficult to cope with.

Furthermore, the limited resources and lack of proper healthcare infrastructure makes the Kurdish doctors’ practice difficult. Considering having a good primary health care system in Europe, you do not see such a load in their hospitals in addition to the good public health knowledge that their people have, are much more compared to our community.

Dr.Rebeen Rahim: Perhaps the problem is organization and administration of resources.  Jordan spends more money per capita on Healthcare than we do and they arguably have a better health care system; so, they are doing something right that we are not.

I would not blame the doctors at all; they are the soldiers at the front lines doing what they can with what they have.  We need better administration and more support. If you look at the Jordan’s or Turkey’s healthcare; neighbor countries, their healthcare budget is by far more than of Kurdistan’s and they have an advanced healthcare. Moreover, there is not a robust plan to establish a solid healthcare infrastructure in Kurdistan.

I believe, if there is a plan to make all hospitals have their own autonomy to deal with their problems individually instead of everything coming down from Ministry, may solve some of the issues. I think with the current budget for the Healthcare system in Kurdistan, it can’t do enough for the Kurdish community. There are defects in the training of doctors and pharmacists; this can also be solved by establishing a better continuous medical education, supporting young doctors and funding them to do more research. And I believe that training is better now as compared to ten years ago, but to make it like Europe, it’s not an impossible dream. We all need to make hard efforts including Government, doctors, medical staffs, and even people to make the system works.

We need to organize ourselves—this can’t be done by doctors only; ministry of health should take responsibility to write a solid constitution for health care system with a good budget and to provide more modern hospitals in the near future and providing efficient research centers in the region.

Aras Ahmed: Governmental hospitals don’t have a good reputation in Kurdish society for many reasons. Private hospitals offer better medicine than the public hospitals. Is that the same in Britain and how to overcome this problem?

Dr. Rebeen Rahim: We need to be organized and have more support from the government.  People perceive better care in private hospitals because they think they are managed more efficiently; yet, they are for profit and public hospitals have more resources.  There is no good reason for public hospitals to be less attractive to the public.

As far as I know, in Britain, the public hospitals offer the best care to patients. So, people usually do not seek private hospitals, unless they want to do an operation earlier—as the waiting list in UK is long, which is not the case in Kurdistan. To overcome such a problem, the Ministry of health should design the hospitals in a way that the patients feel comfortable and safe in public hospitals, they should provide a better nursing care for the sake of increasing safety profiles of the public hospitals. They should make all the medications available in our hospitals, as there is still deficiency of some items from time to time.

Aras Ahmed: What were some of the challenges you first encountered when you came back? Do you think there is a will and determination to have a better healthcare system?

Dr Rebeen Rahim: I was in the UK for a year; I faced many challenges when I came back to Kurdistan. Coming back from a country with advanced healthcare facilities like UK to an incipient healthcare system like Kurdistan is not something easily absorbable.

I am aware that majority of the Kurdish doctors who are trained in UK and came back to practice in Kurdistan, they have got frustration in many ways in practicing and dealing with the system. Lack of proper facility to provide the ideal health care is the main issue for any doctor who is coming back to serve in the region.

And yes, in spite of difficulties and frustration I am optimistic about the will and determination of doctors, staffs, and people; we can make it better, and we have lots of work ahead of us.

Aras Ahmed: From your experience, what are some of the most observable sources of disease in Kurdistan region?

Dr. Rebeen Rahim: There are not enough surveillance data to conclude what are the main sources of the diseases, but from my observation, there are several potential factors which may have contributed to diseases in Kurdistan: like air pollution, bad quality food imports, improper sewage and water system in some areas, and more. Providing bad medication or mismanagement of patients by local pharmacists, who are not real doctors, is one of the factors that may have led to certain diseases

Aras Ahmed: Our world has been computerized. From the viewpoint of a doctor, how do you describe humans’ relation to technology, especially the Internet?

Dr. Rebeen Rahim: The Internet is now one of the necessary resources used as reference to get scientific information. The Internet can be a good friend for a doctor as part of continuous medical education, to get information about recent or old scientific research, and to get up to date publications on treatments in the world of medicine.

Unfortunately, there is no electronic medical records system and proper internet access in our hospitals to deal with patients’ management, as can be found in modern hospitals like in Britain—this is one of the weak areas of our healthcare system.

Aras Ahmed: People say that they don’t have enough time but plenty of stress thereby physical ailment and psychological pressure. How would you comment on that?

Dr.Rebeen Rahim: people here are having much stress about work and what they achieve in return, doctors as well. There is a paradox in Kurdistan, those who work hard, do not get paid well. You can compare a member of parliament and another career for that reason, a teacher or a doctor for example. There is no fairness in the appreciation of work and stress by the government toward the workers of different class in term of their hard work and education.

Aras Ahmed: With regard to your major, what are some of the indications of disease? How can we get rid of them?

There are many aspects we see in patients which indicate the underlying diseases; it’s very difficult to say how we can get rid of them, because we do not have solid screening programs.  For example if someone visits a hospital for having increased thirst, appetite and increase urination at night—it might be a sign of diabetes and it might be sign of stress as well, so as doctors we usually run some blood tests for diabetes to exclude such a condition

Aras Ahmed: what are some of the very first recommendations and advice that you first give your patients? How do you convince them? How do you control your nerve when handling an impatient patient?

Dr. Rebeen Rahim: The answer depends on the illness of the patient. In general, I encourage them to eat healthy food, quit smoking if they smoke, do regular exercise, and if they have chronic condition to take their medications regularly and be consistent following up with appointment with their physicians. I always ask them to seek doctors when they get ill and to avoid the non-experts to give them treatments which do not have any scientific basis.

Rebeen Rahim Saeed finished his medical school at University of Slemani – College of Medicine; he won the prestigious British Chevening scholarship in 2009-2010 to do a Masters in Medical Science (Nephrology) at the University of Sheffield (UK); he also won a Global Kidney Academy award in 2012; he is currently a 3rd year board candidate (doctoral student) of Internal Medicine working in the General Teaching Hospital of Slemani – Department of Medicine. 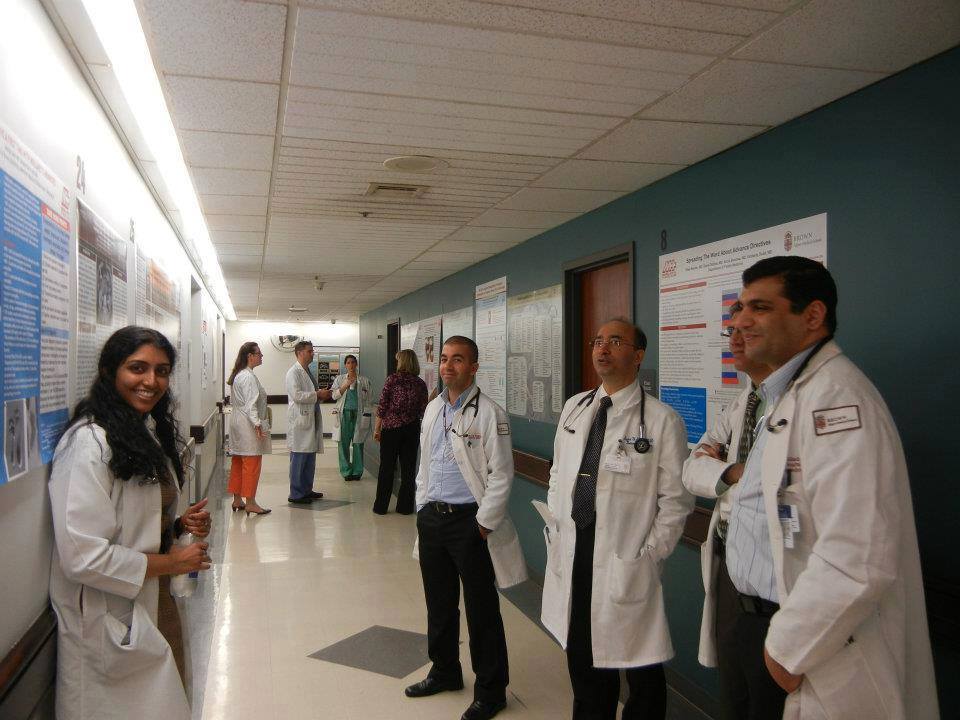