In a world where everyone strives towards increasing one’s wealth, improving one’s status, and securing materialistic belongings, there seems to be a daring group of people going against this monotonous current. The people of Rojava-Gozarto live in dire straits and are in desperate need of food, water, medicine, clothes, and electricity. However, the baffling thing is that they have shown a grand ability of sacrificing anything that is not regarded as a basic need for the sake of those who are facing a fate that’s far worse.

Despite establishing an autonomous area north of Syria, the Kurds and Assyrians choose to invest their loyalty in humanity’s sake instead of man’s own greed. They could have abused the land they are governing, they could have forced the locals to pay for protection, they could have seized food and petrol for the manipulative sake of the ‘revolution’; however, surely and righteously, they did not. The People’s Protection Units (Kurdish) alongside the Syriac Union Party (Assyrian), local Arabs, and Armenians, all of these segments of society choose to provide whatever they can for their people, demanding nothing in return. This sole gesture immured them with the unrivalled support in the area as they proved to be not the lesser of two evils, but the fairest of all possible choices. 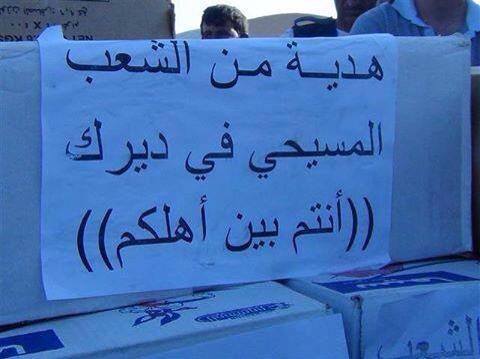 A gift from the Christians of Derik, you (Yezidis) are among your family.

A few years after the Syrian civil war exacted its toll on Rojava, the locals began cooperating more with each other. They worked towards reviving the community culture by purchasing generators collectively, and sharing the electricity between houses of the same neighborhood equally throughout the day. This means that all households settle for only 10 hours of electricity so that everyone is allowed to benefit from it on equal basis. Food rations are being distributed evenly and those who happen to have surplus find themselves motivated to donate them for those in need. In fact, when Yezidis were forced to flee by extremists from Southern Kurdistan, Rojava welcomed them with heartfelt empathy and open arms. Despite its limited resources, Rojava provided everything in her might for those who were risking starvation and imminent death. Moreover, with the knowledge that water is scarce, there is extreme awareness of the best ways there is to utilize water for the sake of avoiding any unnecessary waste.

On the military level, the YPG (People’s defense units) and MFS (Syriac Military Council) were and still happen to be in need of urgent support on the frontlines to fight away extremists especially in Hesseke and Kobane; yet they sent a faction of their units without hesitation across the Syrian-Iraqi border into South Kurdistan to provide a much needed protection to the civilian community, particularly the Yezidi one. At a time where USA was providing assistance through airstrikes in South Kurdistan, the people of Rojava found themselves with no one to rely on but themselves. Nevertheless, they still risked their lives through a ground offensive against extremists in South Kurdistan in order to save the starving civilians on Mount Şingal. 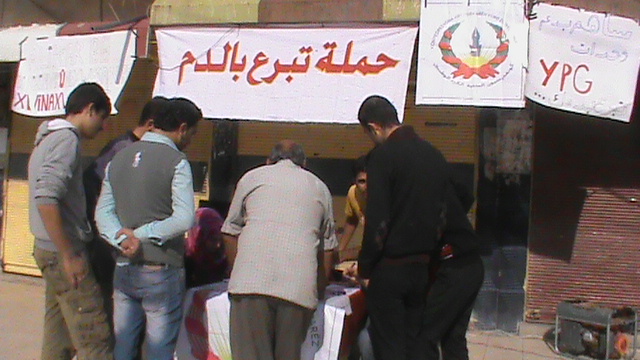 Kurds rush to donate blood at a YPG station.

Call it a revolution, an evolution, a temporary state of order, an organized administrative state or whatever you can muster of labels, but locals have realized that to achieve stability, a community must rely on itself without depending on foreign aid. They are a live example of how humans are capable of making hard sacrifices for the better being of those other than themselves. What the western Kurds brought to the table in the highlight of those recent years will prove crucial to the Kurdish question. Although all Kurds aspire for an independent Kurdish state, the people of Rojava have done so merely by resorting to means that are derived from their end. Nationalistic movements and leadership stem from the local people themselves whether Kurds or not, without the questionable support of foreign powers who seek polluting the roads leading up to independence. By putting coexistence above religion and nationalism, Rojava avoided being manipulated by unworthy intruders who don’t have the faith in the vision of a free country, or simply those who are unworthy of maintaining power and order.

Rojava-Gozarto’s road to independence does not satisfy all components of the Syrian and Kurdish community, yet one cannot deny the courageous price those people have paid out of pure faithfulness and dedication to this movement. From the angle where they stand, the struggle serves as the significant meaning of their short lives. With that knowledge, one grows aware of the reasons why they have sacrificed endlessly and will continue doing so despite the terrible weight of pressure exerted upon them to conform and accept an Islamic state, a Syrian dictatorship, or a Turkish-backed Syrian opposition. Rojava-Gozarto is not reduced to YPG or PYD, it is not just a branch of PKK, but it is far beyond those sections. It is an all inclusive movement, one that does not tackle Kurdish issues without taking into consideration the wellbeing of others. Rojava-Gozarto is a powerful movement that does not treat the question of Rojava alone except in the light of one Kurdish nation, in the light of Assyria’s presence, as well as that of a peaceful Iraq and Syria.