Recently, the Kurdish peshmerga’s have been a beacon of hope and light in a region that is currently overflowing with darkness as more terrorists from the Islamic State of Iraq and Sham (ISIS) seep into Iraq from Syria. The Kurdish peshmerga’s who were once on the receiving end of Iraqi bullets have in recent weeks become more evident in the world’s media by proving their resilience and efficiency in protecting innocent civilians regardless of their ethnicity, faith or political differences; a triumph for humanity that also supplies a greater voice for South Kurdistan’s determination for independence.

A peshmerga is one who confronts death, not one who is armed to face death. This is a common misconception amongst many who fail to remember the unarmed multiplicity of talent that has previously stemmed from peshmerga ranks. With particular attention to the 1980’s, whilst there were Kurdish forces fighting against regimes up in the mountains and on land – there were many unarmed peshmerga’s amongst them or within camps that were ensuring everyone was fed, treated, educated and looked after; these peshmerga’s played a vital role alongside those armed who fought fearlessly.

Born and raised in 1962, in the neighbourhood of Chwar Bax in Slemani, Dr Osman Ahmed attended Slemani’s Institute of Art where he later graduated from in 1985. After refusing to participate in the war between Iraq and Iran in the early eighties, the young artist had no choice but to flee to the mountains of Kurdistan for safety where he joined the peshmerga ranks.

With a fire that seared within for his love of art and the safety of his people, Dr Osman made it his life’s duty to document through his work the Kurdish genocide; the Al-Anfal campaign. Arguably, history will teach us that this world has never favoured the existence of Kurds, this being supported by the worlds silence as a brutal Iraqi regime exterminated 90% of Kurdish villages in the 1980’s alone. The world’s muteness towards the Kurdish genocide strengthened Dr Osman’s determination to one day remind those who remained silent of the atrocities that occurred. This year, Dr Osman graduated with a PhD degree at the University of Arts London. His PhD project titled Documenting the Kurdish Genocide & Anfal: 1988 is focused on drawings created from details conceived through interviews with victims and survivors of the attacks, stemming from the Kurdish areas of Garmiyan, Qaradagh and Halabja.

This is a short insight to Dr Osman Ahmed’s story; an artist, a peshmerga, a survivor of genocide and man who has proved that indeed, the pencil can be as mighty as the gun.

The Peshmerga Without A Gun

Dr Osman was a peshmerga of Patriotic Union of Kurdistan (PUK), upon approaching them, he had openly expressed that he could not kill and he had never held a firearm before only a pencil. ‘It wasn’t easy at first, some of the other peshmerga’s were unable to understand why I did not want to hold a gun but many of the officials appreciated and respected the art I had done previously, from this they gave me a lot of freedom to express myself through art whilst in the mountains.’ The PUK acknowledged Dr Osman’s skills and did not turn him away, his talent and academic background were utilized at their Qaradagh base where his responsibilities involved teaching at local PUK controlled villages; other duties such as cooking and cleaning were also part of Dr Osman’s life as a peshmerga. When a bomb fell in Bergalu in 1987, it had made a sound that no one had yet been familiar with. Upon running to the aid of a shepherd caught in the midst, Dr Osman was left blinded and unable to walk for several days in what was one of many chemical attacks to come in South Kurdistan, ‘My daily life as a peshmerga was no different to theirs (armed peshmerga)’ he reminds us. ‘Being a peshmerga never distanced me from my passion for art, it only strengthened it. There were many writers and poets amongst us, yet my biggest inspiration to continue was from witnessing the suffering of my people.’ 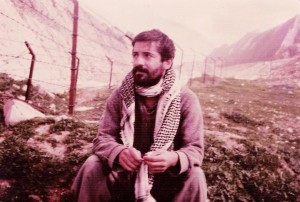 As a peshmerga, Dr Osman had spent time in make-shift Iranian and Turkish prisons. In the course of his time captured, art was an emblem of hope for Dr Osman who would often disguise his talent from enemy authorities who desired his talents for their own propaganda use. With the assistance of the PUK media as well as peshmerga’s, Dr Osman moved to Saqiz in East Kurdistan (Rojhelat) where he continued painting, teaching art in schools and bravely organised many art exhibitions in recognition of the Kurdish Anfal in several Kurdish and Iranian cities. With constant pressure of Ba’athi spies on his back in East Kurdistan, Dr Osman fled to Syria where he continued exhibiting his art. In 1989 he held an art exhibition in the Syrian capital Damascus, where PUK co-founder and leader ‘Mam’ Jalal Talabani had attended bringing with him many diplomats ‘This for me was a great achievement for that time and I was happy with the recognition my art and its message received, during my service as a peshmerga with PUK, they were very helpful and appreciative of my work.’ With his passion for art as loud as his voice for the awareness of the Kurdish genocide, PUK leader Jalal Talabani permitted Osman to leave life as a peshmerga and offered assistance to help him travel to Europe to study art; he has since flourished academically and professionally; exhibiting his art in London, Italy and France. 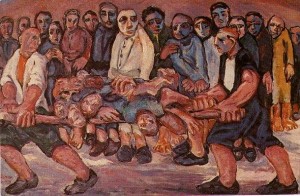 Memories Of The Anfal

They say that events we experience in the darkest days of our lives create the most detailed memories to recollect. Some experiences, as traumatic as they behave in our minds can depict a powerful sense of imagery when recited. Inspired by not only his own anguish, but also the despair of the Kurd’s in South Kurdistan as they suffered mass annihilation and discrimination by the Iraqi Ba’athist government, Dr Osman has dedicated the past 25 years of his art to Kurdish victims of genocide.

In a systematic approach to exterminate the Kurdish population from Iraq’s sight, the number of murdered innocent Kurdish men, women and children is estimated at more than 182,000 between the years of 1986 – 1989 alone. In a series of dark sketches to support his PhD degree, Dr Osman interviewed victims and survivors of the Anfal and converted their endured time under Ba’athi regimes into sketches.

What is most compelling in this particular collection of drawings, is the use of simple expressive lines to create human forms that really allows you to reach out and touch the emotions conveyed. The simplicity of the drawings reveal a raw essence influenced by nothing more than human expression which Dr Osman has refined over the years as his academic practice grew. This enabled him to deliver a more contemporary tribute to the victims; in comparison to the previous approach of brightly coloured acrylic paintings, that conveyed an intense abstract interpretation which was initiated from his experience as a prisoner.

Death camps decorated in barbed wires which hosted tens of thousands of innocent Kurdish civilians that fell victim to diseases, executions, torture and starvation plays the background to many of Dr Osman’s sketches. The compressed mass of Kurds all collectively facing the same fate is outlined through the continuing winding lines on paper as the viewer is given an indication of the mass graves that awaited them. 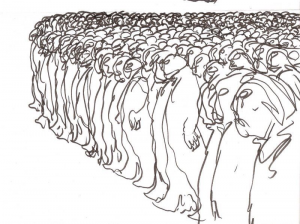 Approximately 40 Kurdish villages were attacked with chemical weapons during the Anfal campaign, the largest chemical attack hitting Halabja in 1988. The deadly mixture of mustard and nerve agents caused the immediate effects of blisters, seizures, vomiting as well as long term effects such as blindness, cancer and birth defects. The catastrophic effects of the chemical gas attack in Halabja also stole the lives of 5,000 innocent Kurds; another sorrowful memory that Dr Osman concentrates on in his collection as he illustrates a horde of dismayed figures gathering around a lifeless bodies of a children on the floor. Flashbacks of last farewells, journeys of no returns and children being snatched away from mothers to be buried alive by armed men is only a small fragment of horror shared as drawings to once again remind the world of the crimes against the Kurds that went unjustified for so long. 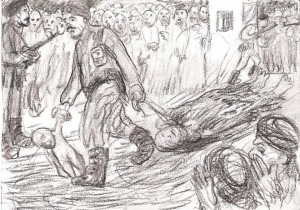 ‘Never give up. Always try your hardest, maintain patience and hope that you can achieve your dreams’ is Dr Osman’s advice for aspiring artists who experience hardship along their journey to achieving their goals. Personal life changing experiences and witness accounts have been a consistent source that although created uncomfortable imagery, has proven itself to be a powerful reason to continue the story of the Kurdish struggle. The effects of the Ba’athi campaign led by the former dictator Saddam Hussein still haunts the Kurds today. It is important that Dr Osman’s art is regarded as a dedication not only to the remembrance of the murdered innocent Kurds but to the survivors who to this day still mourn the times when the world remained silent as they became targets of an ethnic cleansing campaign.

A Gallery of Dr Osman and his work 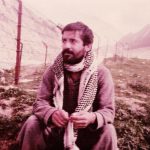