The world of Kurdish politics is not like any other in the world. It has a very complicated and unique context and for a deeper insight an understanding of the Kurdish history, struggle and the origins of each political party is needed. The common Kurdish goal of an independent state of Kurdistan has been brought about by various Kurdish political parties established to work towards this end. However, like the majority of countries around the world, women are either not included or are underrepresented in this arena of political discussion and decision making. This is mainly due to the traditional patriarchal society and culture that denies women the freedom to participate and grow in this arena. Kurds, despite age, sex or country of residence resulting from the diaspora, hope and dream for a united and independent state of Kurdistan. Although Kurds living in all four regions of Kurdistan are oppressed and denied their fundamental human rights, it is without a doubt that the Kurdish women are oppressed to a greater extent. Although it is claimed that women in the Kurdish society are treated better than women in most other Islamic countries, the Kurdish culture and society has been largely influenced by these dominating countries and their cultures, and many Kurds believe many of the harsh treatments on women in Kurdish society, like honour killings, has come largely from outside influences.

The pan Kurdish culture is a male dominated culture where women are oppressed through the way gender is perceived. The patriarchal system has resulted in a large number of uneducated females in the past generations which has marginalised and disempowered women socially and politically and forced these women to become totally dependent on the men of their society. Not only are females excluded in any decision making or powerful roles but they also face normalised of violence such as honour killings, beatings and other forms of brutality. Recently it was also reported that due to all of the psychological and emotional pressure the rate of suicide and “accidental burns” have increased within the Eastern and Southern Kurdistan regions while the government and community turns a blind eye to the situation.

The status of Kurdish women in the political arena cannot be generalised as the Kurdish women of each region are at different stages of their struggle towards equality within their particular State.

In North Kurdistan women have won their equality in the major Kurdish political party PKK and are working alongside their male counterparts, as equals, to fight for their right to be recognised as Kurds and gain equal rights to the Turkish majority.

As West Kurdistan undergoes extreme changes both within the state of Syria as a whole and among the occupied region of Kurdistan, the Kurds of this region are still working as a nation for the right to be recognised as citizens with equal access to education and healthcare. However, it is with great delight to say that the Kurdish women of West Kurdistan have risen up to fight alongside their male counterparts. Having said that, there still continues to be many issues that these females face politically and socially.

Kurdish women in the Eastern region of Kurdistan are not only fighting against the Islamic regime that oppresses all women living under the harsh government of Iran but they are also working towards equality within their own Kurdish society by becoming more involved in politics and activism.

The only region of Kurdistan that is free from general oppression is South Kurdistan and this is where a large women’s movement is able to occur. Najeeba Mahmood, an independent politician and head of the women’s affairs in the non-government Kurdistan Development Organisation in Sulaimanyah, suggests that it is impossible for women to have a high-ranking position purely on her own merits, rather she needs to have a large number of men supporting her. However, there are only a handful of Kurdish women who have this support and have been able to gain some power. Women are fighting their way into the political arena to eliminate gender bias laws that are disempowering women and to bring about equal education and employment opportunities.

Despite the fact that the majority of the Kurdish political parties have declared that they support women’s rights and equality within their party and the Kurdish society, they rarely follow these principles and women are still not equally considered due to the fact that traditionally political status has patrilinealy descended. The patriarchal system continues to overpower women and denies women equal participation in the political arena. The main reason for this is the traditional cultural stigma associated with women and politics. In a traditional Kurdish society women have very little decision making roles outside of the home. Men are the controllers and decision makers of the society and as politics is the ultimate arena for social power and decision making, women are not encouraged to enter the arena and thus a women’s points of view is not represented.

On a brighter note, a new generation of young educated Kurdish youth with different ideas on social directions and change to benefit all Kurds is starting to have an influence on Kurdish societies. As this new generation is more open minded and includes larger number of educated females, many Kurdish women in Southern and Eastern Kurdistan have started to stand up for their rights and work towards empowering women. Women demand entry into politics, however, they are expressing the view that Kurdish political parties only pay lip-service to their demands for greater political power. In Southern Kurdistan, which now has its own legal parliament and political parties, Kurdish women continue to lack access to the higher levels of power in the top parties and government. The dominating political parties of the Kurdistan Regional Government are failing to appoint women in their high level positions despite women being active in the parties because the male members of the party are unwilling to support them in these powerful roles. This reflects the entrenched unequal gender construction and the male dominant culture that has refused to change overtime within the Kurdish society. Not only are the men unwilling to give up their domination of women but they are also unwilling to support major changes in their society that would lead to the political empowerment of women and challenge their domination. Mihabad Qaradakhi, the former equality affairs advisor for South Kurdistan’s Prime Minister Nachirvan Barzani, stated “women being involved in politics in Kurdistan is considered shameful for her family, because the patriarchal mentality is dominant”. Although women are trying to break the glass ceiling they are finding it extremely difficult as it is blocked by Kurdistan’s male dominated political culture.

Despite the fact women consist of half of society, the Kurdish government and Islamic religious influence lacks the commitment to improve the status of women in society. The government and political parties are focusing on improving the roads and developing the infrastructure in Kurdish regions rather than gender inequalities and the rights of the female citizens. Mr Azizi, a member of the Kurdistan Democratic Party, stated that “In the media we hear about what is happening to the men of our society however, none of our law makers and journalists are prepared to talk about all of the issues surrounding women in our society and attempt to improve their situation.”. These are all mainly due to a religiously influenced society that continues to refuse recognition of women as equals because misunderstandings in the interpretation of the Qur’an have given men a greater importance in society and have left women in their shadows. The increased representation of women in the political arena, which is one of the headquarters for change in society, and secularised social constructions are ways that this inequality could be challenged.

Feminism within Kurdish society has not had the same opportunity to grow as feminism in other parts of the world. Feminist ideas are little understood and therefore women need to be educated to analyse their position and to continue fighting for their rights and equality whether it is in politics, the workforce, education or in society in general. However the power within society and politics is still firmly held in the hands of men and this has prevented women from contributing in societal and political matters. Men are in a state of power, they are the law makers, the decision makers and planners whether it is in politics or at home. They are also promoted as the Peshmarga heroes (Kurdish freedom fighters), despite the fact women are also actively fighting as Peshmargas. Women are only the ‘helpers’ of these men, as in they make the life of men easier through their nurturing and housewife roles that have been constructed for them by the dominant males in society and although the need to improve women’s equality within the public and private spheres of society has been raised, no action by men to decrease their held on power has been taken. Ideals of feminism need to become part of men’s consciousness, as well as women’s, to challenge the existing status quo.

Well known Kurdish women like Leyla Zana, Zakia Alkan and Perwin Babaker have played an important role in maintaining the Kurdish identity. Although a large number of inequalities exist within the Kurdish society, the struggles of these women for the whole Kurdish people have helped redefine, consolidate and differentiate the nature of a women’s place within the Kurdish society from that of the Middle East generally. However, despite the struggles of these women, the Kurdish society still has made no real effort to pay special attention to the struggles and desires of women. It is always the men who have sacrificed their lives for the Kurdish cause that are recognised, while the sacrifices of women are hidden and not talked about. This goes back to the strong patriarchal mentality that constructed gender roles to benefit men and dis-empowered women by giving men the strong and important leadership roles within society while females have been left with the powerless and less important roles. However, while it may be easy to judge this mentality, it is important to remember that the Kurdish nation has been denied the right to make their own decisions and a large number of these modes of thinking have been influenced by the dominating patriarchal governments of the host countries.

In order to eliminate this gender inequality within the Kurdish culture, Kurdish women need to have a positive outlook into the future of women and continue to demand their position into politics and to speak out. They must be prepared to face the harsh criticisms and societies disapprovals that they may receive in the first stages of their efforts for change. Kwestan Fatohi, female member and Cadre of the Kurdistan Democratic Party, has stated that “We can have a positive outlook into the future of women and politics as more and more women start to enter the arena and be accepted by men however it is the responsibility of women to bravely fight for their rights and come into the male dominated world of political and overcome the hurdles”. It is important to see education as the light into the future. Young Kurdish girls must be educated in order for them to be independent and contribute to the Kurdish women’s progress. The Kurdish boys also need to be educated to learn to respect the females in their society and look at them as equals. Kurdish girls require motivation in order to reach their potential and the biggest motivation is from the large numbers of women who are getting involved in politics and other issues in their society as they go head to head against a patriarchal society. In order to eliminate the traditional gender prejudices in Kurdish society, Kurdish women must involve themselves in their society and this can only be done through strength, determination and personal efforts. 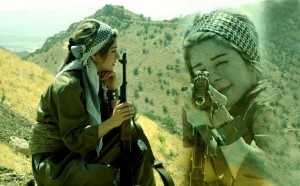