In today’s Middle Eastern politics, everyone from international organizations like the UN to Western Powers such as the US speak of peace and democracy in the Middle East with no concrete effort or meaningful strategy for such noble goals.  The successful strategy for securing peace and sustainable stability in the Middle East requires the development of institutions that are grounded in fundamental values and principles of democracy, and an understanding and consideration of the history of governance in the Middle East, the issues of minority rights and demands for regional self-rule. The Kurds being the largest nation without a state in the Middle East, with centuries of struggle for a decentralized governing structure in the region are an ideal case in point.

An examination of the history of the Middle East reveals that even during imperial times, power was quite dispersed despite strong central authority. The Ottoman’s under the Vilayet system never actually practised complete central authority over Kurdish principalities and other Vilayets in the empire the way that the Turkish Republic does today. The many revolts by Kurdish princes and governors like the Shaykh Ubayd Allah of Nihri and the Badir khan’s demonstrate the ability of the Kurds in Ottoman Kurdistan and Persia to act autonomously. The principalities of Ardalan, Guran, Mukri, Baban, Buhtan and so forth are notable examples of Kurdish autonomy and self-administration prior to the establishment of the current boundaries of the Middle East.

Despite being labelled as separatists and terrorists by some, the Kurds have been one of, if not the only, actors furthering democratic development and resistance in Turkey, Iran, Iraq and Syria. They have for the past 100 years, or some may even argue more, served as major resisters of oppressors and autocrats in the region and the blood they have given in their struggle to obtain their national democratic rights has been a significant force in preventing the further spread and entrenchment of tyranny in the Middle East. Building and sustaining democracy in any of these countries in other words starts with settling the Kurdish question.

Furthermore, The Kurds have historical connections and ongoing relationships with the nations in power of the countries that occupy their land. Despite the antagonistic nature of this relationship they are ideal candidates for mediating a measure of peace and stability because their demands have always been democratic making them natural allies of every democracy seeking Persian, Turk and Arab.

Contrary to what many may claim, a peaceful resolution of the Kurdish question is very much possible and it begins with the inevitable process of federalizing governance in Turkey, Iran, Syria and Iraq. Today we witness a federal Iraq with a Kurdish regional government. The KRG is very prosperous and is slowly becoming a serious model of a working democracy in the region with a growing civil society that is making significant social, economic and political strides. A similar phenomenon is likely to take place in Rojava (the Kurdish region of Syria) with the recent establishment of several autonomous cantons. The Kurds of Turkey have made similar demands with Ocalan’s theory of democratic federalism, and the continued efforts by Iran’s Kurds along with its other nationalities, for a federal democratic Iran prove federalism and decentralization to be the most viable way forward for Middle East peace and stability.

In International politics, realists always emphasize the balance of power and how it is usually responsible for peace. If one applies this logic to the Kurds and the governments they are resisting, than it is quite clear that supporting the decentralization of the governments of Turkey, Syria and Iran into federal systems would serve to create some measure of peace and stability by creating balance of power between the Kurdish regional governments and the central governments. Such a balance and decentralization of power would prevent, or at least make it very difficult for strong dictatorial regimes to re-emerge and re-entrench themselves in these societies, as we have witnessed in the past and are witnessing today in Iran and Syria. Such an arrangement would undoubtedly force all powers to the negotiating table when disagreements arise since no power would be strong enough to defeat the other. The best course of action would thus be for all parties to sit down and work out their problems peacefully.

In a region as chaotic as the Middle East, strong and autocratic central governance will not work. History shows us that the monopoly of power by one nation or group over others will no lead to stability and peace in the Middle East, but rather harness the foundation for its end. For instance, Saddam Hussein and the Sunni monopoly of power in Iraq demonstrates what can happen when one group monopolizes power and deprives other groups. A lesson Iran, Turkey, Syria and even Maliki’s Shia dominated government fail to comprehend. The only way to foster tolerance, democracy and a truly representative and inclusive system in such a multi-cultural and multinational region, is as previously cited by the promotion and advancement of a decentralized federal system. Federalism would localize governance making governance more effective and representative creating a sense of common interest among the various groups in the region given that each group is granted a share in power.

The path to a more peaceful and democratic Middle East is thus clear, and it starts with finding a just and peaceful resolution to the Kurdish question. Therefore, for peace and democracy to make major headway in the Middle East it is essential that the international community and major international powers back the resolution of the Kurdish question and treat it as a priority in their respective Middle East policy. For, the freedom of the Kurdish nation would mean the furthering of peace and democracy in the Middle East and the birth of federalism in a region where power is unchecked and constantly contested often violently by various groups and movements. 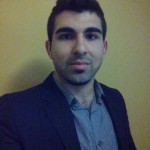 From Canada. Halmat Palani is an undergrad student at British Columbia’s Simon Fraser University set to complete his bachelors of Arts Degree in Political Science by June 2014. He is very enthusiastic about international politics, development, geopolitics, political organization and philosophy with a particular passionate for Kurdish and Middle Eastern politics. He plans to continue his education and pursue a Masters Degree and a PhD in the near future.[/wc_testimonial]