On the 10th of March every year the Kurdistan Regional Government and its citizens colour the entire town with their attire. Whether they be heading to work, school, university or spending the day shopping in the Bazaars of Kurdistan, women, men, young and old are covered head to toe in their suave Kurdish clothes.

Sitting behind a computer in Australia I watched my social media timelines light up with Kurdish clothes. Beautiful women glowed like flowers as they went about their daily work in traditional clothing. Handsome men shone their rays across the land of the Kurds, in their sharwal & kuwa assemble bounded at the hip, many with Traditional knots.

As with anything Kurdish, the day also caused some waves. Many different opinions were voiced each determined theirs was surely correct. The discussions intrigued me as my eyes soaked up the opinions of Kurds across the world and their thoughts of a National Kurdish Dress Day in The Kurdistan Regional Government (KRG).

Although many took the day in stride and radiated pride through their colours, there were also many opposing opinions. Nissy Koye from Canada stated on twitter that it was just another way Kurdistan was mimicking the west by romanticising something that should be natural, that we as Kurds would come to a day were the traditional attire would only be brought out on that specific day. Nawras Mahmood whom lives in Slemani provided an interesting stance by boycotting wearing traditional clothing and stating she didn’t want to reduce the great tradition to a single day.

The most interesting opinion of all came from Dr Sherko Kirmanj, who currently resides in Malaysia, by stating that calling the day “National Kurdish Dress Day” was nationalistic and mimicking of the oppression we have faced from our occupiers for so many years. His argument emphasised the need for a “National Dress Day” instead due to the diversity in Kurdistan. Although I am still unsure how the celebration of one culture, in its own homeland, is an automatic oppression of the presence of any other, I enjoyed the civil discussion it produced. This opinion alone triggered the thought’s that followed.

It is very important to point out that the KRG, also known as South Kurdistan, is currently the only region of Kurdistan which has the freedom and political peace to celebrate so proudly the presence of traditional Kurdish Clothing. In many regions of Kurdistan Kurdish clothing is a symbolism of our struggle and the presence of it is a sheer icon of defiance.

Last year on April 15th, in the city of Mariwan, East Kurdistan Iranian government security forces paraded a convicted criminal through the city dressed in traditional Kurdish women’s clothing as a form of punishment. The act was carried out in the hope of embarrassing an alleged criminal in public. This was not only an insult to women worldwide but specifically targeted an ethnic minority in the region & their traditional clothing. This caused a global outcry and movement, where men dressed in women’s Kurdish clothing and posted photos online in solidarity with both women & the Kurdish people.

I wander what those who genuinely believe that the clothing of another culture should be looked down upon, in this instance the traditional clothing of the Kurds, thought when they saw that the Kurdistan Regional Government had taken a day out to colour Kurdistan in culture and tradition?

This is only one of many examples of the dehumanising of an ethnic minority through their traditional clothing. Lawwen on twitter urged the Twitter-verse not to forget the three women viciously beaten by ultra-nationalists for wearing Kurdish clothes in the streets of Istanbul last year.

This deserves its own celebration.

“Kurdish Clothes Day, like other occasions, has a role in keeping Kurdish culture alive, therefore they have to be preserved so that the future generations are proud of it and be part of their identity.”– Aras Ahmed Mhamad, Slemani

“Wearing such an iconic and symbolic piece of clothing puts you in touch with your roots and there is no prouder feeling. When we come together in Kurdish clothing it is as though we’re acknowledging our unity and community.” – Sarah Naz, England

“It’s a great opportunity, especially for the youth. They get the chance to go to school in their Kurdish clothes and sing patriotic songs, to learn more about their own culture and identity which is increasingly being influenced by the west.” – Tablo Mohammad, Italy

“Our clothes are a symbol of who we are and this is a reminder for us all. I think people should wear Kurdish clothes more often.”– Kanya Said, Sweden

When asked what Kurdish National Clothes Day means to you: “It’s about being yourself. It’s about pride. Small effort, big step. As Kurdish identity lacks self-esteem due to suppression.” – Beri Shalmashi, Hewler

The below photo is my favourite shot from the hundreds that lit up my computer screen. The photograph captures Korak Agha with colleague Elizabeth Anne O’Sullivan on Jili Kurdi Day during work at The American University of Iraq, Sulaimani (AUIS). It reminded me that Kurdistan also harbours many fresh faces, not so familiar with the identity of a Kurd, as someone born with one. And what a tremendous learning curve it must be for them. 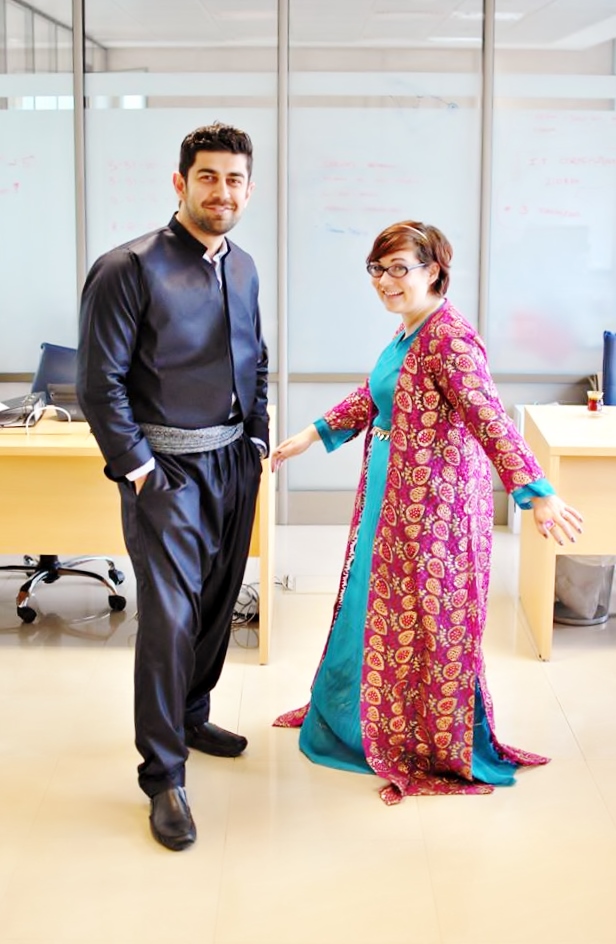