“There are no human rights without political rights” – Hannah Arendt

The Universal Declaration of Human Rights is something that is often talked about in the West and praised by many. It is the product of the Holocaust and the violence of World War II. The declaration opposes such things as murder, political imprisonment and torture to name just a few, yet these autocracies still occur due to the fact that human rights and political rights are interconnected, along with power and interests. There are winners and losers even when it comes to the basic human rights because there are systems in place that prevent the whole of humanity from equally accessing these basic rights, which are presumably granted to all. Our nation, the Kurdish nation, a population of over 30 million, is one of the most heavily affected by this issue as they are deprived of their basic human rights, due to these restrictions that are in place in the world of international politics.

Firstly let us begin with a brief introduction about the Kurds. The Kurdish people are the largest ethnic minority group without a State. They have a population of between 30 – 40 million. They inhabit a region in the Middle East that is adjacent to Turkey, Iran, Iraq and Syria. The Kurdish people are a nation with their own culture, language and history but after World War 1 they were denied the right to autonomy and a country. Since then, the Kurdish people have faced a large number of human rights violations, and continue to do so today.

Post WWII, politics and interests often clash with human rights as it is a complex paradox which respects State sovereignty above human rights. There is no enforceable international law which can ensure global human rights because the principle of State sovereignty denies the interference of other states or organisations in domestic affairs. Therefore, in the game of international politics, human rights is often used as a toy and played with to gain self interests. In this ruthless political game, Kurds are often used as toys and played with by those in power.

The plight of the Kurds has often been left unheard by the world because of their lack of political power. However, as history and even present day scenarios demonstrate to us, Kurds can be selectively heard and seen when world powers perceive Kurds as a way to reach their own interests and goals. World powers are aware of what happens within each of these states but keep silent until it benefits them. This has nothing to do with the genuine concern for Kurds at the time, but rather it is because of the political issues the two governments have with each other.

In South Kurdistan we saw what the brutal dictator, Saddam Hussein, put the Kurds through, however while he had good relations with the West, what he did to the Kurds was only his business. After facing genocides, horrific mass murders, tortures and of course a not so good relationship between Iraq and the West, it was finally time for the intervention that was overdue. But sadly although during the Iraq War the Kurds were one of the United States biggest internal allies, when it comes to the Kurds in North Kurdistan, world powers want nothing to do with them.

Turkey occupies the largest proportion of Kurdistan and it very brutal towards the Kurds. Turkey has thousands of Kurdish political prisoners in its jail cells, the government denies the Kurds basic human rights and has failed to sign important human rights conventions. However, because it is a major Middle Eastern ally of the West, all of these violations are kept silent. The only condemnation that turkey receives is from the European Union. Even then some have argued that it is not a genuine excuse, but rather it is an excuse to deny Turkey’s entry into the EU.

Syria, a Baathist regime and effectively a dictatorship has not granted any fundamental rights to its citizens. The relentless efforts of President Assad against protesting Syrian citizens confirm how ruthless this administration is. The Kurds, who are living as a people in West Kurdistan, currently occupied by Syria, have no fundamental rights not even the right to exist as Kurds. The Kurds are one of the biggest opponents that the Assad regime is now facing. Up until now, these Kurds have been the most ignored by the world, but now governments who are for the downfall of the Assad regime are happy to protect the Kurds. How ironic.

It can be argued that these human rights abuses are all reported by organisations such as Amnesty international and Human Rights Watch. The European Union and specifically European countries such as Sweden, Germany and France regularly condemn the mistreatment of Kurds in all four countries occupying Kurdistan. But the problem is that no action is ever taken to ensure that the rights of a population of over 30 million are protected. The importance of human rights is always preached by the West and international organisations but they are prepared to turn a blind eye and allow for the denial of these rights. This suggests that human rights are not global and are not as important as they are deemed to be.

Although I believe that the sovereignty of a State should be respected and is an important factor in international politics, it is also the duty of the international community to step in when a government is incapable of respecting human beings especially when an entire nation is pleading for help.

As Kurds, we often complain about our denied human rights and we often try to get our voices heard, but unfortunately, as the quote states “there are no human rights without political rights”. Human rights are only in place to protect those with power, or those lucky enough to have a government who respect human beings, something that Kurds have not been blessed with. 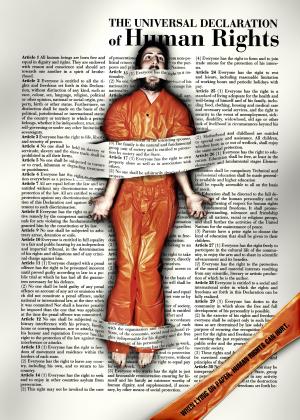