Should the United States befriend the Kurds as key allies in the middle east region?

In his most recent 2015 publication, David Philips’ book has captured the attention of many leaders and scholars worldwide due to the current conflict in the middle east. Due to ISIS’s emersion, a new map of the middle east is being drawn before our eyes, therefore it is no coincidence that this book was conveniently published at the time that it was. “The Kurdish Spring: A new Map of the Middle East” runs it’s central scholarly theme through the struggle of the Kurds, a topic that has been ignored for most of the twentieth century in sharp contrast to today. The book is a less scholarly account, more of a beginner friendly for those who are unaware of the Kurdish issue. It is written with a sense of appreciation and sympathy towards the stateless minority of the region. As the largest stateless people in the world, Kurds are in the center of the drama unfolding in the middle east, as they have always been.

Philips begins by taking us on a trip down memory lane beginning in the aftermath of World War I up until the end of the 1990s while analyzing the root causes of the Kurdish problem in all four states. A strength worth mentioning consists of Phillips’ ability to draw a comprehensive picture of the Kurds in all four parts of Greater Kurdistan: western Iran, northern Iraq, northern Syria and parts of southeastern Turkey. The place in which these four areas come together is a mountainous region in which the Kurds reside, thus explaining their motto “no friends but the mountains.” The book discusses the betrayal of the Kurds, then moves on to the abuses shed upon the people by these governments. He discusses exorbitant measures enforced by Iraq such as the use of chemical weapons. Perhaps the worse treatment came from Saddam Hussein, who used chemical gasses in the 1980s to kill roughly 182,000 Iraqi Kurds. He explains Turkey’s restrictions on political and cultural rights to its Kurdish citizens. He talks about denial of citizenship and punishment for expressing Kurdish identity in Syria. He also makes note of the ongoing repressive rule in Iran. Philips does an amazing job at illustrating the relationship the Kurds have with each of the four governments. Through his analysis in Part 2 of the book, it becomes apparent that the Kurds have been mistreated by each power. After explaining the tragic history of betrayal and abuse the Kurds have experienced, the author moves forward hopefully to tell a story of progress. The third section highlights the progress made by the Kurds, including their new found autonomous region in northern Iraq with their own constitution. And finally, the last part of the book discusses peril and opportunity in that “everything changed after the Islamic State overran Mosul and declared a caliphate with jurisdiction over Muslims worldwide” (p.189). As Masoud Barzani, president of the KRG stated “the time is now for self-determination” (p.196)

My main argument lines up with Philips’ main argument, in which he states that because the Kurds play such a key role in the region, the United States should obviously support them. He claims that US strategic and security interests are in the hands of the Kurds, especially when it comes to the fight against Islamic extremism. Philips predicts the downfall and fragmentation of the state of Iraq and therefore suggests that the Kurds of northern Iraq should be supported by the United Staes in their quest for independence because Iraq is no longer becoming a feasible state. When it comes to the Kurdistan Worker’s Party (PKK) in Turkey, the US should support their removal from the international terrorist list. And finally, Washington should support the Kurds of Syria who are actively engaged in fighting the Islamists.

The counterargument was once acted upon: do not explicitly help the Kurds but instead encourage and support a united Iraqi front. The United States, in fear that oil revenue would speed up Kurdistan’s independence process and fully breakup Iraq, opposed the export of Kurdish oil. It actively tried to prohibit sales, for example pressuring the Turkish government not to buy oil from the Kurdistan Regional Government (KRG). Oil revenue was critical, “Baghdad was supposed to distribute 17 percent of the country’s total oil income to the KRG, but it always distributed less than what was owned. Moreover, it suspended payments entirely in January 2014” (p.202). This has had considerable effects on the way the KRG’s ability to govern, in turn delegitimizing their government. The problem lies in the stark choice the US must make: either reengage in a war that the Obama administration has been against since day 1, or let Iraq collapse due to sectarian differences. But since his September of 2014 speech, Obama has declared an open-ended war against extremists in Iraq and Syria.

In conclusion, through the poor decisions and badly executed war in Iraq by the Bush Administration and the general lack of leadership by the Obama Administration, the one thing that has remained constant in the middle east has always been the Kurds. This book explores the subjugation of Kurds by Arab, Ottoman and Persian powers fort close to a century and does a fantastic job at explaining why Kurds are all of a sudden evolving from being the victims to a functioning political community.. I believe it has considerable potential to become a main reference on the Kurdish struggle. If anything, the work in this book will hopefully offer a new perception on the injustice brought upon the Kurds by the Great Powers and will encourage new perspectives on the ideas of sovereignty and statehood. 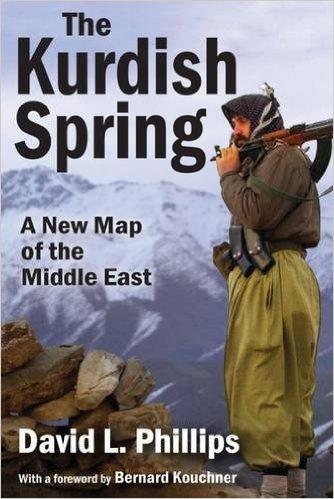