I’ve always had much love for writing. I’ve been writing both professionally and privately, and in my future profession as a lawyer, the pen, in cooperation with my tounge, will be my strongest weapons. I guess that’s why I continue to unite letters into words and to create pieces for people to read – It’s because I hope that this one person, me, can leave you somehow affected by my words. So, as the greatest rapper of all times Rakim once said, and as I always quote: Come, take a walk verbally with me!

As an engaged law student, I’m often active in debates and I always wave the flag of justice, no matter the situation. In a discussion with my mentor about all the wars going on in this world, and the picture media paints of it, he told me something I couldn’t relate to. He said: “Aina, you are so naïve”. His explanation for this was that I’m too good, and I believe that people are good as well. He told me not to expect so much of people, because the world we live in isn’t all pink and cute. It is cruel. It is dark. The people in it are selfish, ignorant and they just go on about their lives while people like me try to write for a change.

I guess what he was trying to get at was that people won’t change after reading an article in the newspapers. And the newspapers don’t publish news to change peoples minds. The newspapers are big companies, and all they want is to make money. They publish what sells. Not what affects. That’s why Rihannas last drunken day get much more attention than the wars in Kurdistan, for example. Because Rihanna sells, death don’t.

My respond to my mentor was no denial though. I accepted it. I said alright, I may be naïve, but I’m rather a little bit naïve than as cynical as you. I want to believe in people, in humanity, in morality and in hope. I wanna be hopeful. I wanna be that small light in a very dark room. I told him that even if I only got one single person to wake up and see the world for what it is, to seek knowledge and stop being so judgemental, I will be satisfied.

So I continue. And I hope that someday, my pen will leave thousands affected. 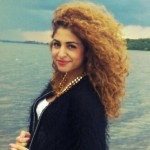 Article Written by Aina Drima Rasool,  from Sweden. I am a dedicated law student and columnist. I was born in the beautiful Hewler, but raised in Sweden. In a world made of peer pressure and manipulation, I believe the most important thing is integrity. My favourite quote of all times is “Lock my body, can’t trap my mind” – and that’s exactly what I mean. Even if my physical integrity is being  dictated, I will never change my own way of thought. As Descartes said: “I’m thinking, therefor I am”.[/wc_testimonial]