“Feeling oppressed is not solved by reinforcing negativity and fear. Education, positive actions and peace building are the answers.” Andree Murphy

Growing up in western countries, today’s Kurdish youth have had different circumstances and adolescent experiences of background and ethnicity, than many of us ever had. Kurdish trans-nationalism, also known as diaspora nationalism, is now days at some level existing in most people’s lives. Social media and its availability has simplified the sharing of knowledge, but most importantly communication among Kurds around the world. Kurds who in the past were kept unaware of their origin and their people’s struggle has now the opportunity to acquire knowledge that was previously unthinkable. How has the information channels that are bursting with knowledge affected Kurds who grow up outside Kurdistan? Not only can we take part in the news since the moment unfolding events anywhere in the world, but we also have the ability to influence such developments. This progress has resulted in the start of a various number of projects aimed at voluntary and charitable work for Kurds and Kurdistan. 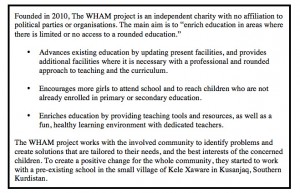 Initiatives such as the WHAM project provide unity in Kurdish communities, as we get to know more about ourselves, and thus stimulate a sense of belonging among initiators and participants. It motivates youth and sparks a fire and a desire to be part of a grassroot movement that gives back. The participants in this project are paving the way to use the ability of youth to empower each other and be of use for Kurdistan’s future.

As diaspora members are provided with training and information to stimulate dialogue and promote local integration opportunities, associated Kurdish youth are successfully engaged in building a modern identity of belonging among Kurds that reside outside of our homeland. In doing so they enhance the capacity of civil society actors by promoting use of international human rights mechanisms, and facilitate access to decision makers in their respective communities.

The answer my friend, is blowin’ in the wind

The team behind the WHAM project consists not only of diverse and driven volunteers, but is also international as it includes members in the United Kingdom, Australia, as well Southern Kurdistan. All of the team members appointed WHAM’s founder Amina Shadab, to be an admirable initiator, and pointed out her belief in the fundamental right of every child to have an education. Amina believes the right to education to be as basic as the right to breath, as it creates a foundation for the child’s future. She explains how “education offers us a better understanding of the world around us, and encourages open-mindedness in society; human beings, and particularly children, go through an endless list of hardships on a daily basis, however the primary method of rectifying the problems caused by many years of adversity has to be a good, broad and above all stable education.”

As a representative for the WHAM project along with the other team members, Amina is concerned with Kurdish youth and how they can best utilize their competency to teach children to read or write. “It may seem only as an insignificant act, but to that child it can change his or her life, and child by child, town by town we can start to reduce the appalling figure, which shows that 17 % of Kurdish children in South Kurdistan have not had or are not in a stable primary education, and thus improve Kurdistan as a result.”

When asked about their reasons to assist as team members, events co-ordinator Kharmen Billimoria stated that a thorough education is a “vital contribution to a child’s future”, and was the purpose and message of the project according to Kharmen. While secretary Robyn Howard, emphasized how the importance of the project lied in its impact to change lives. The team was unanimous in its perception of the project being rewarding, as well as how individuals, no matter how few, can be of impact. As a representative Hawri Ahmad humbly pointed out, “WHAM is an organization with a genuine aim in making a difference.”

“I fell in love with Kele Xaware, knowing it would be a typical Kurdish village. The children at the school seep through my veins and entered the beat that drove the rhythm in my heart. It’s just one school, in one village out of thousands that need, so desperately to see change, but even the change to one student life will be like changing an entire education system. Who was it that said change starts with just one person?”  Tara Fatehi, Australian Ambassador for WHAM. 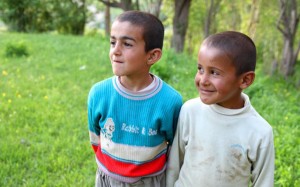 “Kurdistan has come far, but let us not become complacent. Make a real difference in the world, change a life by helping a child to read, and you can help make a country, our country, into a better place. Join us at the WHAM project and our incredibly dedicated team on this journey; I know that, through this project, we can strive for peace and prosperity in this world by improving education for children, and rekindling the flame of hope for a new generation of Kurds, a flame previously extinguished by years of war and pain.” Amina Shadab.

To know more about the WHAM project, and for information on how you can be involved, go to www.whamproject.org.uk