It’s no mystery, really. When culture turns innovative it becomes a domain consumed and maintained mainly by young adults. Throughout my years as a former musician, people have told me there is an annoying void of such character within the Kurdish entertainment industry. Considering the music industry in particular, the modernization we’ve recently come to witness has resembled an ill-fit adaptation to cultures surrounding the native Kurdish nation rather than elevating Kurdish innovation to new levels. As a consequence, many new productions appear to have repelled more youngsters than what would be reasonable for a nation. This, however, might not apply to all. When Aras Koyi introduced himself to the Kurdish audience there was an overdose of initial skepticism. He was too silly, too crazy, too childish, too western and too immature. His lyrics were too amateurish and his videos were not contemporaneously Kurdish with him walking around in a garden and acting like a gentleman. Little did they know – that was exactly what he was after. Years later, although Aras has become a figure known to the public, his unusual ways seem to have the attention of young Kurds lingered around its fingers in Kurdistan as well as abroad. Whether he is dragging a stubborn donkey through Greek alleys, having a mega tomato-fight in Spain or simply stalking a girl in Kurdistan while shouting the words every girl wants to hear (Dear chubby!), his songs and videos are received with peculiar curiosity. His latest work, however, takes him to a different direction and one which we have not associated with his style. Was it a one-time-slip or is he full of surprises? I had a face-to-face-meeting with the artist to know who he is, and why he is that way.

It’s been a while since Aras and I last spoke. We go way back, to the beginning of the good old 90’s in Sweden. A time when I was a teenager, the serial killer “The Laser Man” was terrorizing immigrants throughout the country, and Aras was a fanatic George Michael-fan. He will probably hate for mentioning this, but there was a period when he even wore the same type of jeans-dominated outfit as his never-dancing-again idol. I cannot decide which attribute left a more severe impact on history. Still, it’s a time I personally look back at with a smile. The Aras I have in front of me now I feel is a bit different. He is thinner, he wears other clothes, and his fuzzy coiffure is no more. But he has the same cheerful humor and he is just as easy to talk to. I asked him to describe himself in short terms.

–          I am an old youngster, says Aras with a hint of a sigh. Someone that has crossed my paths to find the one that belongs to him. My search for the art form I wanted to work with was not easy, and I have made a lot of mistakes. But I also have gained a lot of useful experience.

His search began at an early age. Already as a child, like many other children of politically active parents forced to grow up in the Soviet Union, he was an entertainer. Either he was having fun singing and dancing with friends, or he was performing on school stages. After moving to Sweden, he was able to nourish this hobby of his into a career by experimenting with art forms. Now after years of trials, with many directed music videos and a master’s degree in art in his artistic baggage, Aras finally sees himself settling down.

I cannot help but to ask – how does Aras see the difference between himself when we first met and the one in front of me? His answer intrigues me:

–          I am more down to earth now. I know my limits but also of the limits of what I can ask for. You could also say that the Aras 10 years ago was a happier one. He was dreaming more, and having bigger and more vivid dreams. The Aras now is more realistic, although he cannot stop dreaming. If the day comes when I stop dreaming then that will be the day I will stop with my work.

More realistic, less happy, in touch with himself, and short-haired. To me, it sounds like Aras has finally reached that unavoidable adulthood most of us deter. But the simplicity of mere aging doesn’t seem to put up a fair picture. Putting two and two together, I realize that his art persona exudes a process of change. Also, to put in cliché-words – no change is easy. On the contrary, most personal changes are products of battles and hard choices, and Aras is no exception.

–          If you look at my insignia, you will read my name but you will also see a heart and a music note. If you look closely, you might see a sword piercing the whole thing. This is a sword of mine and I use it to fight the struggles and battles within me and against my surrounding.

I got a bit worried as I thought Aras was going to deliver some no-substance platitude to impress me. God knows there is no shortage of such statements from Kurdish celebrities. But Aras remains, in my impression, as forward as ever:

–          My whole purpose is to struggle, and I use what I can use to fight. My work is in a way my sword. I resent and fight intolerance and backwardness. There is a lot of intolerance in the world, whether we are in the West or in Kurdistan. Intolerance of thought and of opinions, of gender and of ethnicity. Of people with different sexual orientations and religions. I am not perfect myself, but I try to be a better person. I use my songs and video ideas, my childish and comic approach to cut off the edge of uptight reality.

Aras wonders me with his motives, and if it wasn’t for his latest music video/short movie “My Kurdistan” I would have doubted his sincerity. Watching the production, we see another side of him, and he touches upon an issue he hasn’t touched before – Kurdish patriotism. Could it be that the video is a manifestation of a new and big change? After all, it is a work of ambition: a high-budget (by Kurdish measures) production with Aras, together with loads of politicians and 4000 children, diving into Kurdish dreams of independence. What brought the idea to life?

–          The song belongs to my brother Hogir. It’s a dear one to me and I wanted to renew it. The video was a way for me to express my Kurdish emotions and how I think Kurdish patriotism should look like. A pure love without being dominated by politics and adherence to parties. It was also a part of an event held by the Ministry of Martyrs (KRG) – the 25th anniversary of the Kurdish genocide baring the motto “From Tears to Hope”. The production itself was a blast. So many people participated of whom I cannot thank enough. And the kids! Oh, those lovely kids. Many were asking why I hadn’t brought my donkey to set (appeared in the music video Betak u Beko).

Aras also tells me that the song and video were originally planned to be parts of a bigger project he had been working on for the last 5 years. Here is a bitter treat for me, and probably, for you too.

–          It is a Kurdish musical. A picture unique to the Kurdish cinema. The background research has kept me preoccupied, to put it mildly. I’ve traveled to many countries and spoken to Kurds from all over Kurdistan. The manuscript and the production plans have been ready for ages, and as of now, we have approximately 40 songs to choose from. Most are new but we do have a large amount of old and obscure folklore that I wish to renew. For instance, a couple of old Jewish ladies sang me Kurdish songs I had never heard before. They had been only 10 years when they left Kurdistan in the 50´s, and they sang folklore songs from the era. Even the dialect they spoke was different from any other Kurdish dialects I had heard. Many people I met bared invaluable cultural treasures.

By the sound of it, a modern musical with a Kurdistan-related theme. As unfortunate as it sounds, the usual reason for most unprivileged Kurdish artists has put it all on an indefinite halt.

–          The song was supposed to be the ending of the picture. I was in dialogue with KRG regarding financial sponsoring and I was promised their full help. For some reason, the promise was withdrawn. I’m not sure why. Now, I try to make and release the musical piece by piece as extended music videos whenever I find the budget for them, says an obviously disappointed Aras.

Personally, I would love to see such a production, and this ought to be a golden opportunity to enter an unknown territory in Kurdish. Now, however, it seems like it will be chopped up into small appetizers. Aras, though, is on a different level.

–          I am happy with how this video was made and I am grateful to Mr. Aram Ahmad (minister of martyrs) for his help. It has gone viral within the Kurdish community, I am told, and I heard it also cause political discussions between Kurds and others. My dream for the project would be to complete the whole thing, but the reality of the world tells me differently. Never the less, I would be happy to collaborate with sponsors, governmental as well as commercial, to realize the project.

This is when the bitterness knocked me. This isn’t how it should be. Seemingly tiresome, even if many want to dream, a bureaucratic realism overtakes them and slows them down. This isn’t the way to cultivate a future culture. It’s a total waste of talent and precious time to actually realize something worth realizing. Aras agrees with me. He isn’t as bitter me, though. He tells me he will continue trying, and he won’t give up. In the meanwhile, he wishes to fulfill one of his personal dreams, one that is closer.

–          Becoming a father is one of the most profound wishes I have. To raise a family and have my children running around like crazy, that would be the life! I want at least 4 kids.

His wife gasps in the background. I’m not sure if she is terrified or astonished. Aras seems to continue being full of surprises even to the dearest to him. If anything, this by itself is talent. An old youngster, forced into an unhappy relationship with dry realism, seeking goals blocked only by futilities. I surely hope that next time I speak with him, someone – or ones, have stepped forward and aided him bringing his musical to life. Time is ticking, and it would be a major loss for us and for Kurdish entertainment if Aras, and people like Aras, stopped dreaming. 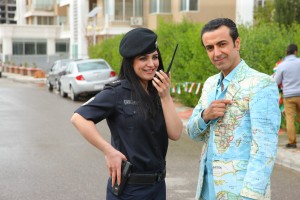 Interview conducted and written by Saladin.

“Saladin is Saladin. Someone that enjoys the grey in a world of blacks and whites, the gruff in the choir and the simple in the confusion. People tell me I put the “I” in driven. I say – there is no “we” in buffet.”