What has a 5” full HD display, runs android and destroys the Apple iPhone 5 in every way? You guessed it, it’s the Samsung galaxy S4. With its stylish all plastic body, 13 megapixel camera, removable battery and a 1920 X 1080 super AMOLED display what is there to hate about the device?

The Samsung galaxy S4 is the fourth installment in the multi-billion dollar series of galaxy S devices. With amazing internal features and a body that looks much like the slim and stylish S3 it will make the best of us do the switch.

The outside of the Samsung Galaxy s4 is very reminiscent of the S3. This I just Samsung saying hey our phone looks pretty damn good, and they are right the S3 definitely had an innovating design. So why should they change something that already looks pretty amazing? In saying this there are two minor changes. These include the glass no longer being curved, instead there is finally a bezel meaning the device is a lot more durable against drops. Keeping in mind that this doesn’t make it indestructible so don’t try anything stupid. The next thing is that Samsung managed to increase the screen size to 5” without making the device any larger.

Next we go into the specifications. This and the new functions within android are the shining points of the phone. The device comes with a Quad core 1.6GHZ Cortex-A15 CPU. Has an Exynos 5 Octa 5410 chip-set and a 2600 mAh battery. Not only does the S4 come with a 13 Megapixel front facing Camera but also has a stunning 1920 by 1080 display. It also has a pixel density of 441, meaning that you can’t visibly see those pixels. Finally the phone also comes with new Gorilla glass 3. This is meant to be a lot stronger than the previous version of gorilla glass, however sand can still scratch it with ease.

Finally we enter the Operating system. With the newest version of Android (Jellybean v4.2.2) this phone is not joke. Now if you want a nice clean version of the OS look somewhere else because just like any other high end Android phone it is completely modified. Not only is the operating system coated with a new skin but there are so many new features added to the phone that it will amaze you. Not only has the voice recognition become much better, but there are added features like scrolling through the page with the flick of your head. Some say these features flood the device, but I say these features are amazing.

Not only has Samsung once again amazed us with how much they know how to perfect a phone, but they have also once again become a larger threat towards Apple and their iPhone franchise. Not only does the phone keep its style from the S3 but it also keeps up to date with the latest technologies making it compatible with any game on the play store. This new Samsung Galaxy S4 is definitely an eye turner and is fast becoming a be a force to be reckoned with in the world of telecommunications. 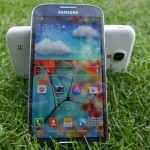