As Kurds, we are used to hearing about the brutality the Turkish government spawns on our people on a constant basis. This unfair treatment has sometimes gone out of hand for reasons far beyond our knowledge. Take for example the open fire that killed six Kurds in the Kurdish province of Sirnak just two months ago- all of which were teens. But today I’m not here to discuss the monstrous actions committed by Turks to Kurds, because it seems that there is also little remorse for its own people, let alone [somewhat] public figures within their own land. 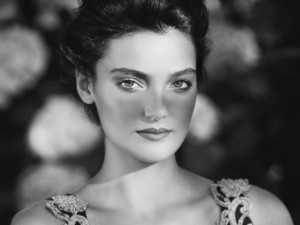 Former Ms. Turkey Merve Büyüksaraç, crowned in 2006, is now facing prison for an Instagram post. Did you all just think to yourself: “huh?..” yeah, so did the rest of the world. Prosecutors are claiming she “insulted” the Turkish president Recep Tayyip Erdogan and is facing up to four years. This quote unquote insult was actually a picture of a quote from a satire called The Master’s Poem- a piece of writing which uses lines from the Turkish national anthem to criticism Erdogan.

Ms. Büyüksaraç was detained in January and has been thoroughly interviewed. She is now waiting on an Istanbul court to decide the future of the case. The 26-year old industrial designer and writer states that she “did not personally adapt the poem. I shared it because it was funny to me. I did not intend to insult Recep Tayyip Erdogan.”

Turkey has recently been cracking down on individuals- particularly social media users- who express their opinions about government. Just two months ago in December, a 16-year old was also arrested for “insulting” the president. This sort of ruling is not much different from the kind we see in countries like Iran or North Korea- something very close to authoritarian rule. This is symptomatic of the political climate Turkey has created for itself- one in which criticizing government has become a crime and could potentially land you in jail. 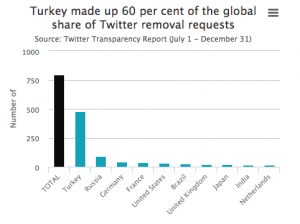 Now you’re all probably wondering- “which country holds the highest number of Twitter removal requests?” Well ladies and gentleman, it would be …. (drumroll)…. Turkey. Keep in mind these removal requests also include court orders and those from government agencies.

While the Prosecutor has stated that “the remarks shared by the suspect could not be considered within the terms of freedom of expression,” let us all be reminded how often we forget the value of freedom of expression. To the diaspora of Kurds around the world sharing your voices on any social media site- DO NOT STOP. You have every unalienable right to share your feelings and thoughts. You [hopefully] live in an environment where presenting your thoughts on certain governments lands you a glare or rude comment at most- not torture, jail or death. Use your carefully put together words to inspire others, to inform others and most importantly, to illuminate others on a cause you whole-heartedly believe in.