The tablet industry is booming with successes in our new generation of technology. The device allows users to experience a handheld Smartphone but with enhanced hardware and larger displays. With a massive 34% of America’s youth owning a tablet, there are only a few questions left to be asked. The tablets history, how it works and their effect on society.

The idea of a tablet was brought about in the 1960’s when a man called Alan Kay made a sketch for a handheld device made to replace a piece of paper. The biggest issue here was the handheld device part. It was particularly difficult to make a tablet small enough and light enough to be handheld. Finally about 23 years ago the Grid pad was invented. This brought a massive leap in the tablet industry as it was small enough to be handheld. However there was a problem, the device was far too heavy and was extremely expensive ($2,370) also it only had 3 hours of battery life. However this placed the tablet industry into the right direction. From here many companies would start to jump onto the tablet bandwagon, and begin to revolutionize it. The Apple Newton message pad was Apples first revolutionary invention towards the Tablet industry. It was four times smaller, lighter, had increased battery life. However as the years progressed Microsoft’s COE decided to come out with his own input of the tablet. Bill gates boldly came out with the theory that a tablet should be a handheld PC. Many companies (E.G Compaq, Asus, and Acer) agreed with this idea and started the trend of tablet PC. Finally in the year 2010 with the smart phone industry growing,  Apple decided that a tablet shouldn’t be a PC but smaller, it should be a Smartphone but larger. This brought the introduction of the iPad. Apple made billions and put a point out there. It wasn’t the idea of the tablets that failed; it was the operating systems in them. Since the creation of the iPad, tablets have been a lot more user friendly and a lot more profitable. 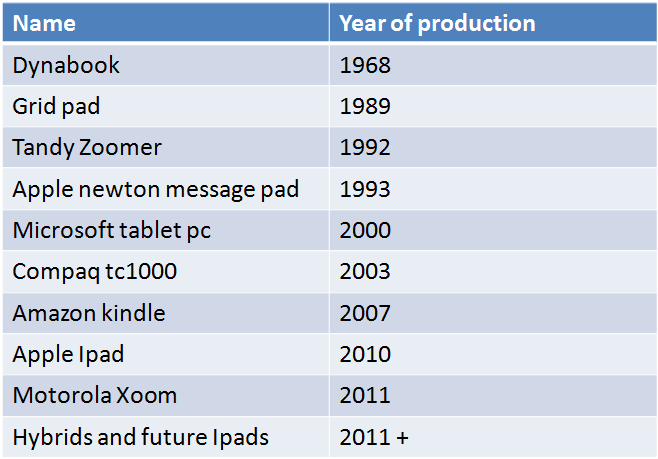 Tablets are complicated handheld devices that bring joy to one’s life. But how do they work? And what technologies are used inside of them to make them a tablet? Although there are many different technical parts to a tablet, such as how audio is sent to speakers or headphones.

Most tablets of this era use touch sensitive screens. This is usually a glass screen on the front of the tablet that is used as a navigation tool for the user. The user touches places they want to go on the screen and micro touch sensitive sensors pick up these movements. The information is then sent to the motherboard of the tablet. The sensors as well as everything else inside of the tablet are connected to a dash board, better known as the motherboard. The information is then carried out to the CPU. The CPU acts as the brain of the device, it does intense calculations to carry out orders from the user.  The battery of the device keeps everything alive and ready to work. Random access memory better known as RAM, this is used to remember what applications you have used recently, however it get wiped every time you turn your device on and off. Then there is the HDD or SSD. These stand for hard drive disk or solid state drive. Both hold information on them and certainly carry the operating system. The operating system is the user interface; it is what the user sees and interacts with. Games carried out by the user are supported by the GPU. Which stands for Graphics processing unit and is usually integrated into the CPU.T his carries out all of the graphical business. These include games, multitasking, browsing the web, taking pictures or even having the screen just turned on.

No doubt that technology has changed society massively. However what have tablets done to change the way we think, do things and socialize?

The answer is Tablets have changed society immensely. They have done so socially, physically, media wise and entertainment wise:

However they aren’t all good impacts on society things like:

All of which can occur through a PC or smartphone but now all the more accessible on a tablet.