Why Kurdistan is not Iraq; Little over a year ago I moved to Kurdistan. A scarred region that, partially, has taken giant leaps to the prosperous place it is today. Now, politically, Kurdistan is difficult to describe to some. Geographically it’s clear. Kurdistan is the Land of Kurdistanis. Kurds, Turkmens, Assyrians and others who have shaped this region out of love for the soil they consider home.

KRG governs from within Iraq, but the Kurdistan Region is not Iraq as you know it. And it should never be again. I wish the whole of Iraq, not to be that place we know from blasts and bombings. And I am proud of KRG, in the north, for its developing democracy, and its strong defence towards terrorists trying to terminate the success. Radicals fear Kurdistan will grow beyond the borders of Iraq, into its natural, geographical shape. Now we can debate whether that would be healthy, but that is not the point of this piece.

Whoever of my colleagues, friends, acquaintances have visited, fall in love. Some move here. Others at least spread the word about this other Iraq, and most of them definitely plan to come back.

September 29th, terrorists entered Erbil, the capital of the Kurdistan Region. They splattered their blood nearby the headquarter of security forces. Just the day before, the local government shared the results of very democratic parliamentary elections. Thus a milestone in the havoc of the Middle East.

This part of Kurdistan is a safe haven. And a goldmine. The markets have been rising, ever since the Kurdistan flag is prominently waving to its refreshing wind.

In all objectivity, Iraq has fallen into three. Of which Kurdistan is the part all Iraqis consider safe. The place to go on a holiday. The place to breathe. To develop. To invest. It saddens me that ten years after the decease of Saddam’s regime, people still die daily due to instability in south Iraq. But the situation there has no correlation with the region here.

While as to the world it sounds normal, yet another attack in Iraq. To those here, it is not. When I state that Kurdistan is not Iraq, I am not stating this out of ideological reasons. Kurdistan is not Iraq, because it is not the Iraq of the bombings, or the conflicts between two different floats of followers of the same faith. We could call it a marvel, this safe semi-autonomous region, surrounded by struggle on all borders. KRG has been doing an excellent job keeping the hazard away. Danger lures around, definitely. The recent attacks in the Kurdistan Region of Iraq were aimed to destroy the sense of freedom one has here. With whole different motives than the assaults on the same day, in Baghdad, the capital of the real Iraq. 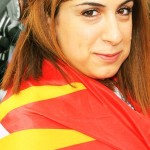 Beri Shalmashi is a very talented writer, director, producer and Lecturer with a Master of Arts in Cinema. She is also the ambassador to ECHO Foundation and One Young World.[/wc_testimonial]